You think it can’t happen here? It sure will if Obamacare is not repealed.

﻿ ﻿ The parents of a Canadian boy ordered off life support by government health officials are pinning their hopes on Michigan Children's Hospital in Detroit.

Moe Maraachli and his wife, Sana Nader, of Windsor, Ontario, are asking the Detroit hospital to accept their 13-month-old son, Joseph, currently kept alive by a respirator at a Canadian hospital. The family wants Michigan Children’s Hospital to perform a tracheotomy on the child, who suffers from a rare, progressive neurological disease which, Canadian doctors say, has left him in a vegetative state beyond recovery.

Joseph’s parents believe that if the Detroit hospital will accept the child and conduct the operation, in which doctors would place a breathing tube in his windpipe, he could be cared for at home.

But time could quickly be running out.

Canadian health care allocation officials already ruled that Joseph had to be taken off life support and allowed to die in the hospital. A Canadian judge then ruled that Moe Maraachli had to give his consent to having the breathing tube removed by Monday. He refused.

Maraachli says turning off life support could cause his son to choke and suffocate. He told Fox News on Wednesday that the doctors at London Health Sciences Centre have said the “best treatment” is to “let him die… I don’t know what kind of treatment that [is].”

The family believes this procedure will allow Joseph to breathe on his own, and thereby be able to go home and likely die there.

Doctors are now asking the Canadian government to allow them to remove the breathing tube without the family’s consent. The Ontario hospital contends that a tracheotomy would be painful for the boy, despite their argument that Joseph is in a vegetative state.

But officials there appear to be cooperating with the transfer request, noting in a statement, “We can confirm that we have sent the medical record, which is over 1,000 pages to the Children's Hospital of Michigan...This is an extremely difficult time for the family, and our goal is to continue to provide compassionate care and support to baby Joseph and his family."

The London Health Services Centre says it will wait until it hears back from the Detroit hospital before making any further decisions about life support.

Email ThisBlogThis!Share to TwitterShare to FacebookShare to Pinterest
Labels: obamacare

Sharia in the U.S. and flag of Islam over the White House 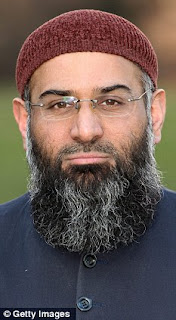 Call to arms: Muslim extremist Anjem Choudary will call for Sharia law to be established across the U.S.
A hardline Muslim cleric who sparked anger across the U.S. with his anti-American comments in a television interview this month is to hold a protest outside the White House.
British extremist Anjem Choudary - who once said 'the flag of Islam will fly over the White House' - has announced he will lead a demonstration calling on Muslims to establish the Sharia law across America.
The rally, planned for March 3, is to take place just weeks after his on-screen row with Fox News presenter Sean Hannity.
Mr Choudary, 43, called Americans 'the biggest criminals in the world today.'
The former leader of outlawed group Islam4UK told the Daily Star 'we expect thousands to come out and support us.'
Mr Choudary said the March rally was organised by the Islamic Thinkers society, an extremist group based in New York.
Two other British extremists,  Abu Izzadeen and Sayful Islam, have also been asked to speak at the demonstration.
Izzadeen is the hate preacher who caused fury last year when he called British soldiers 'murderers' the day he was released from jail after a three-and-a-half year sentence for inciting terrorism.
Mr Choudary told the newspaper: 'The event is a rally, a call for the Sharia, a call for the Muslims to rise up and ­establish the Islamic state in America.'

Furious reaction: Cleric Anjem Choudary made headlines when he was interviewed by Fox News presenter Sean Hannity earlier this month
However, whether the three will be able to enter the U.S., especially Izzadeen, remains to be seen. Even a tourist visa requires applicants to answer questions on whether they have been involved in acts of terrorism or plan to commit crimes in the U.S.
'This is a unique event taking place in Washington, outside the White House which, Inshallah, (God willing) will garner huge support.'
He hit U.S. headlines just two weeks ago after his furious exchange with Mr Hannity on Fox News. The presenter became so enraged with his anti-American comments he ended the interview by calling him a 'sick, miserable, evil S.O.B'.
The East London-based cleric's anti-American stance is well-documented. Last year he led protesters in burning the American flag outside the U.S. embassy in London on September 11. 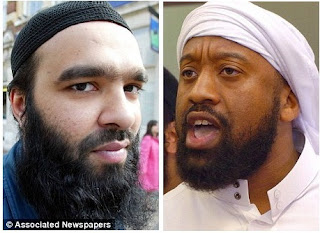 British extremists: Sayful Islam, left, and Abu Izzadeen, right, have also been invited to speak at the White House rally, which will call for Sharia law in the U.S.
And in October, he told an ABC chat show that 'one day the flag of Islam will fly over the White House.'
He told the Daily Star: 'They have seen our activities in the UK and Europe and have decided they want to challenge the vacuum in ­freedom and democracy and the ­people in the front line of the struggle against Islam and Muslims - the ­American ­government and the ­establishment.
'They have invited and ­myself and Sayful Islam from Luton to come over to address the crowd and rally support.'

Scene of protest: British extremist cleric Anjem Choudary plans to mount a pro-Islam demonstration outside the White House next month
'We are going to address ­corruption in the Senate, corrupt foreign ­policy, the mayhem around the ­Muslim world, the drug and ­alcohol culture, ­promiscuity and the pandemic of crime in America.
'It is only right the call is made in the heart of Western ­civilisation in front of the biggest pharaoh that ­exists today, which is Barack Obama.'
He added: 'I think the American people’s hearts and minds are open to receive Islam as an alternative way of life. We expect thousands to come out and support us.'