.
Today is the first day of a two and a half week stay-cation so I was out of bed later than usual this morning. On my way to the kitchen I turned on the TV only to hear the last bit of a sentence and as I turned it was accompanied by a full screen picture of Andrew Breitbart with the ominous 1969 - 2012.

After a quick about face I sat down and quickly stumbled over the keys trying to sign onto my computer all the while unknowingly mumbling "not Breitbart, not Breitbart, it can't be Breitbart .." 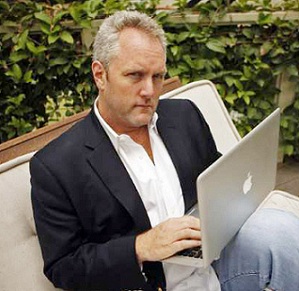 But the time I realized I was saying it, I had confirmed it was indeed, Breitbart.
I just started to cry.
Did I know Andrew Breitbart? No. Was I a huge fan? No. Did I realize what a huge force he was in the conservative movement? Yes. But I took him for granted like oh so many other things in life.
And now he's gone.
Thank goodness he lived life to the fullest with enthusiasm and passion, loved by many and hated by an equal number. He wore that animous as a badge of honor so while I find the vile commentary all over the internet to be repugnant and disgusting .. we need to remember that up there in heaven Breitbart is repeating every remark with glee. He fully enjoyed retweeting all the filth thrown at him on Twitter to reveal the character of the progressives who attacked him.

Yes, Andrew Breitbart is gone from this earth, but he has left behind an army.  #IAmAndrewBreitbart

RIP Breitbart. Your work will continue.