A small gift, a huge promise

*
My office er .. roomate ﻿at work had to go out east for a week and brought back this little defective bell as a gift for me.  I know, right?  I set it on it's tiny box and decided it would stay there.
My defective bell stands for liberty which means more to me right now than at any other time in my life.  I took a couple of pics and then realized I had set it right next to one of my little army men.  Don't all office workers have little army men on their desks?  Anyway.  The juxtoposition of them both I thought was perfect.  One makes the other possible. 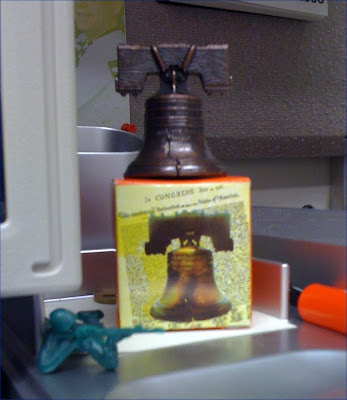 We need to take heart where we can, absorb our strength and keep moving forward.  We CAN take our country back.﻿
*
*
Posted by Janie Lynn at 10:12 PM 1 comment:

Email ThisBlogThis!Share to TwitterShare to FacebookShare to Pinterest
Labels: let it ring 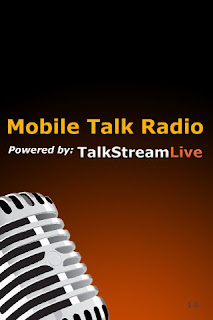 Radio stations in my office are limited. My office mate listens to 'oldies' all day long, most of which I know the words to which tells you something. But that's not what I want to listen to. And of course none of the stations that carry the programs that appeal to me - will come in on any regular radio inside our building.

So I downloaded TSL Mobile Talk Radio on my iPhone and it has been a God send. At any given time during the day I can listen to whoever is on - be it Glenn, Sean, Rush, or one of my favorites, John Gibson. Surprised me, but I like to listen to him. Actually he's on Fox News Radio, but I digress.

Which brings me to my point. Why people are voting. John was trying to get his audience to think about whether it is racism to vote for someone because of their race, if it is considered racism to not vote for someone because of their race. Because whether they want to admit it or not, a lot of black voters are still supporting Obama, regardless of the fact that he has done nothing, zip, to help them. So what other reason besides the fact that - he's their guy?

Late in the day I received a call from a lady I have worked with off and on for 20 years. We were discussing work and how our helpdesk just got outsourced to India, and how distressing it is. We were ending our call when she said "well just be careful who you vote for."


We did the dance for a bit "well ... I'm thinking this is a conversation we don't want to have, not a good idea to talk politics ..."


"Because I'm rabid. Okay? I cannot stand Obama and I think he's the worst president we've ever had." I said it. 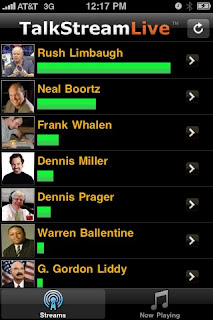 "Really? I ... wouldn't have thought it of you." What? Am I a pedophile or something? Because the way she said it - it sounded that bad.
She proceeded to tell me how she will never vote republican because of George Bush. I started to tune her out while she spewed all the half truths and old grievances against Dubya. And I finally said "Bush isn't running."
"Doesn't matter .. I wouldn't vote republican, my husband voted for him and I didn't talk to him for weeks!"
"You're an election behind. Bush didn't run in the last election and won't run in the next!" I was getting exasperated. "Obama is a freaking socialist. Besides which he SO doesn't have a clue ..."
"Well the problem is people only listened to the campaign talk, they didn't ask for specifics - maybe if Obama had run 10 to 15 years later he would do better but he's in over his head. And he's an idealist."


I told her she was edging toward the tea party side and she said "yeah, a little."


"Well you know the tea party candidates will be running as republicans, right?"


"Yes, if they run as a separate party they'll split the vote and the democrats will win."

It made me angry that she is still so mad at George Bush, that even though she grudgingly agrees Obama is not the best, she still doesn't want to vote republican.
People need to educate themselves for this election. Listen to the radio - watch TV, read - listen to all sides and see what makes sense to you. Because one side or the other side will make sense to you. But for God's sake don't vote a certain way because you hated the other guy who isn't even running, and don't vote for or against someone because of their race.
And in these times, if you can't be bothered to learn the issues and the candidates stances on them and what those things will do to our country - DON'T VOTE! Please. Don't vote.
*
Posted by Janie Lynn at 9:27 PM 3 comments:

Who are these people? 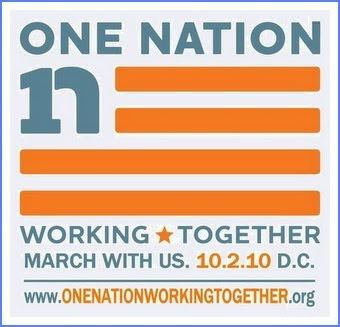 It took over 400 groups and organizations to bring the numbers to Washington D.C. that Glenn Beck got all by himself. And they insist on saying we, the conservatives in America, are the minority. But the groups rallying against us are organized and dangerous to our freedom and would give more power to the government than at any time in our history. One Nation Working Together (you notice they stop short of "under God") was the primary group behind todays march on Washington.

Project of the Tides Center, designed to energize the far-left for the 2010 mid-term elections
Headquartered out of the offices of USAction and the Service Employees International Union

A project of the Tides Center, One Nation Working Together (ONWT) is headquartered in the Washington, DC offices of USAction. It also coordinates some of its activities out of the New York City offices of the Service Employee International Union (SEIU). ONWT's principal goal is to inject new energy into the social justice movement in advance of the 2010 mid-term elections. The organization's “signature event” is its October 2, 2010 “March on Washington,” whose purpose is to inspire “an intensive voter-mobilization program for Election Day 2010.”

Please go to Discover the Networks.Org to read the platform of this group, as well as the list of people that endorsed today's event.

Makes me want to fight all the harder.