Who the hell does BHO think he's speaking for?!

.
What on earth is Obama up to now?  Why is he doing this to Israel?  And to Netanyahu?  This is the second time he has cut Netanyahu off at the knees and insulted him.  Prime Minister Netanyahu is on his way here.  And Obama undercuts him like that the day before!  Obama has treated Netanyahu shabbily, has not done the dual podium appearance with him when he was here, had him leave by the freakin back door, he has treated the leaders of China and Mexico with much more deference! 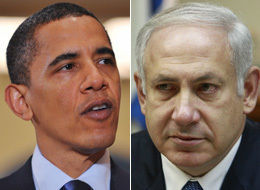 When he demands so arrogantly that Israel push back their settlements to the 1967 borders - he is NOT speaking for me.  How DARE he do this?  Israel is our ally, and the only reason they still exist is because we have been theirs.  Having the threat of the U.S. jumping on any country that attacks Israel has been a huge deterrent for idiots like Ahmadinejad who are just waiting for a chance to wipe Israel off the face of the planet.
What will become of Israel if we don't have their back?  Doesn't Obama care?
The man disgusts me.