Whoopi is playing cards with racists! 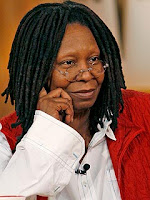 It's very apparent that while many conservative bloggers write very smart and well researched posts, I write emotional ones. Lately I haven't posted much at all until something reaches a fever pitch (and that may only be in my brain) and I feel gray matter threatening to decorate my walls if I don't just say something.

It's probably more just putting it down in writing that helps, but whatever.


This time it's the freaking race card. ARGH-H-H!!! Apparently Whoopi felt justified in playing it today because doggone it - someone finally backed the president into a corner and made him produce his long form birth certificate and then had the nerve to question how he got into Harvard if he was a crappy student! It's TRUMP for goodness sakes! He has more nerve than anyone!

Trump said something today that I wanted to plant a big wet one on top of his swirly haired head for. Reporters were peppering him with questions after he responded to hearing about the birth certificate, with barely disguised hostility, I might add. Trump made a remark about how the press "is very protective of the president".

So here's my beef. Why is it so hard to believe that people dislike Obama so much because of his policies, his unparalleled arrogance (okay, Trump is right up there) and his unwillingness to listen to the people of the United States because he has an agenda and thinks he just knows better than we do? And the fact that the whole mainstream media protects the average viewer from anything that makes the president look bad, in stark contrast to when they highlighted anything and everything (and even made some things up) that made president Bush look bad and oh my gosh - stupid??? 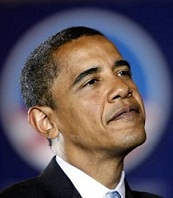 So yes, people are looking for what they can to discredit Obama because the press isn't investigative (apparently) anymore and are painting Obama as the happy, shiny president, and not the one that flat out lies - on-camera and in print - to the American people! Or maybe people are frightened of a president who is making our nation weak in the eyes of the world and is ruining our economy because he is incompetent and ineffective and people don't want him in office one minute longer than he has to be? Just maybe?
So Whoopi reached her limit today (much like I did) and proclaimed she was playing the race card now.
Well congrats Whoopi. You just joined the others that can't see past the color of someones skin and can't think a tiny bit outside the box to figure out some other reason people might be unhappy with an elected official.
So, just who is the racist in this equation?
.
Posted by Janie Lynn at 10:32 PM

The "race card" is played when desperation sets in. Unfortunately for them, after being called "raaacist" for the past 3 years because we don't agree with Obama, just doesn't have meaning anymore.

Whoopi always has been, is now and always will be a dyed in the wool racist.

She believes that if you disagree with a black person you are, ipso-facto a racist.

Unless you disagree with Cain, Thomas, Rice and other conservative blacks.

They are "Uncle Toms," because, and only because, they disagree with her.