,
Okay so maybe I am the 12,324th person to say that.  BUT I LOVE IT!  What a time for Romney to come out swinging!  And somehow, he was still gracious about it.

When the debate was over, President Obama greeted Michelle as she came up onstage and I swear she looked to me like she was about to throw up.  She had to know how bad it was.  (Think she was still proud of her country?)

But instead of writing about how wonderful the debate was (and it really really was) - what struck me was the comparison between Obama last night - and Obama today.  Next to someone who really understands the economy, he was hanging onto his talking points by his finger nails, repeating the same untrue figures over and over again and trying to sound intelligent while not making sense. 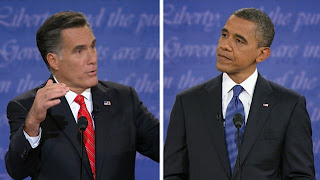 Today - in front of another hand-picked adoring audience - he was arrogant, sarcastic and full of himself as usual.  Next to Romney who was uber prepared and articulate Obama was simply outclassed in every sense of the word.  Today without anyone there to call him on his untruths and misdirections - he was rallying the crowds of believers, in his element. And I am afraid that is where he lives.  In a bubble where those around him let him believe his own press and prop up his ridiculous ideology.  But out in the real world on a stage with only one challenger, he crumbled.  He knew he could not defend his record and seemed stunned that every time he said something that was not accurate - Romney called him on it.  Every. Single. Time.

One of my biggest problems with the Obama campaign is that it is all smoke and mirrors, no substance and full of flat out lies.  It was a joy to see the POTUS silenced because someone dared to point out that he was not telling the truth.

Today - Obama went right back to the campaign trail where he feels most comfortable with the swooning crowds, dribbling sarcasm out of one side of his mouth and condescension out of the other. He is back to doing what Mitt said his boys have done - saying an untruth over and over again in hopes that people will believe it if he says it enough.  It's a little frightening to realize that the man who holds our great country in his hands right now, is horribly delusional.

He needs to go.  The suit is totally empty.

Seriously good post! I agree that Obama was out-classed and out-everythinged. The deep irony is that the very media who've been coddling and protecting him are to blame . . . if they'd been doing their job, he'd have had answers. They didn't, so he didn't. Did you notice how he kept looking at Leherer like he was supposed to save him? It as embarrassing. Obama got steam-rolled, but he has only himself and his dinosaur puppets to blame . . .