In mourning - and hating it.


.
Seriously, where did we go wrong?  In my neighborhood there were very few yard signs, very few bumper stickers.  I was thinking that was a good sign, while there wasn't a ton of support for Romney, there seemed to be even less for Obama.  And we're talking Illinois!

Since the election every time Barack Obama's voice comes from my radio or TV, I turn down the sound.  I cannot bear to hear his voice.  Do I hate him?  Almost.  What I do hate is his smug - smartest guy in the room - attitude.  His thin skin and his - how dare you question me - posture.  I hate all the things he is wrong about that the media won't report, and the lies he tells that they cover up. 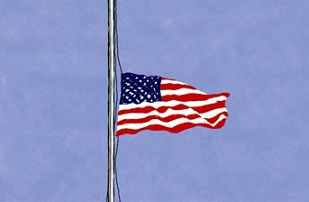 I hate that the media gives him a pass and that people who only watch the MSM don't understand what he's doing to this country.

I hate feeling helpless to do anything to stop the slide we're on.

And I am sad.  Incredibly, terribly sad.

I'm so tired.  It's going to take some time for me to feel the ability to fight again, mostly because I know there are going to be 4 more years of the most insufferable president ever.  Not sure I can take it.