Could not resist this bit of science!

Discovery Announcement ~ The densest element in the known Universe has been found!
* 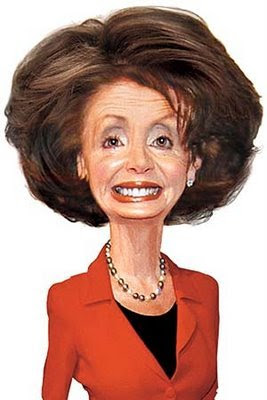 A major research institution has just announced the discovery of the densest element yet known to science. The new element has been named Pelosium. Pelosium has one neutron, 12 assistant neutrons, 75 deputy neutrons, and 224 assistant deputy neutrons, giving it an atomic mass of 311.

These particles are held together by dark forces called morons, which are surrounded by vast quantities of lepton-like particles called peons.
The symbol of Pelosium is PU.

Pelosium's mass actually increases over time, as morons randomly interact with various elements in the atmosphere and become assistant deputy neutrons within the Pelosium molecule, leading to the formation of isodopes.

This characteristic of moron-promotion leads some scientist to believe that Pelosium is formed whenever morons reach a certain quantity in concentration. This hypothetical quantity is referred to as Critical Morass.

When catalyzed with money, Pelosium activates CNNadnausium, an element that radiates orders of magnitude more energy, albeit as incoherent noise, since it has half as many peons but twice as many morons as Pelosium.

Email ThisBlogThis!Share to TwitterShare to FacebookShare to Pinterest
Labels: discovery

Here I was along thinking she was just an inert, gaseous, minimal element of an idiot.

Congratulations! You have just insulted the universe.

The entire universe, after it has collapsed on itself, will not be as dense as Pelosium (PU - which, of course, stinks).