Generalities do TOO count!

.
It is amazing that a group of people not representing any particular country, not representing a certain government or nationality, not even the majority in the religion they fight for - is holding the world hostage. 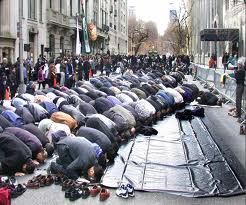 The debate going on right now about touching people's "junk" or getting the body scans is all about Muslim extremists. Our own citizens are being treated like criminals in the name of safety, springing from an obscene and desperate necessity. We don't want to die.
It is really hard not to paint all Muslims with the same broad brush. Americans do not understand Islam, it's teachings are completely foreign to us. In the simplest terms because I'm a simple gal, God is good. God is different things to different people but in the American culture it really is simple. God is about love, hope, faith, and charity. And please, don't go all Old Testament on me here, I am speaking in generalities. We do not understand a religion that generates such hate and such violence.

Islam does not make sense to us, it clashes with all we know of religion and belief in God, it's tenants the total opposite of what we learned as children and heard preached from pulpits in temples and churches across our land. And because it does not make sense to us we have no frame of reference to say oh - this group has chosen to follow this part of the Koran and that group interprets the Koran in a totally different way. And because so few Muslim groups stand along side Americans in outrage when acts of terrorism have occurred, it is hard for us to not be suspicious of them, uncomfortable and sometimes, afraid.

The more we are restricted and man-handled and feel we are losing our rights to things as personal as our own bodies, the less we are apt to feel kindly toward Muslims in general.

Because we freaking cannot tell the difference between a Muslim that will hurt us and one that won't!

And it is simple self-preservation that we feel the need to mistrust those we cannot fathom, and those we see as being the ones responsible for causing us pain. They do not wear a sign that identifies them as a friendly Muslim or a frothing at the mouth crazy Jihadist nutbag Muslim.

I'm sorry but I just wish they would go. OH THE HORROR! My brothers would be so appalled. But I do. I'm tired of feeling like a racist when I worry about whether or not someone I love will be blown to bits while doing something as innocuous as shopping for Christmas gifts. I don't want to feel I have to change my way of life because someone wants to kill me and would delight in cutting off my head while rolling video. There is a part of me that wishes we could pull the virtual covers over our heads as a nation and not have to let anyone else in - and start a steady stream of Muslims on their way out. 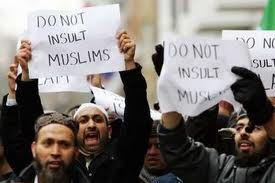 I can't apologize for feeling that way either, because I wouldn't mean it. I can say I'm sorry if I hurt some one's sensibilities but that doesn't change the way I feel. I am so tired of people wanting to destroy us simply because we exist and feeling like we have to be on guard all the time.
Oh to be 11 years old again, riding my sting-ray down the street with no hands, with no worries beyond crashing my bike. I don't like what our lives have become and while I don't generally like to play the blame game, damn it, it is Muslims that have brought us here. I just wish they didn't like it here anymore.
.
Posted by Janie Lynn at 10:02 PM

"...cannot tell the difference between a Muslim that will hurt us and one that won't!"

That is a most profound statement. It explaines a lot about our attitudes toward Islam, Muslims and many other things as well.

In the end, a group that wants to be well thought of must thrust its good qualities to the fore and repress its bad qualities. This holds true whether speaking of whites, blacks, Christians, Muslims or whatever.

We must all do our part in squashing the "bad apples" among us or else we get the reputation (read:stereotype) we deserve.

"I don't like what our lives have become and while I don't generally like to play the blame game, damn it, it is Muslims that have brought us here."