Time for the truth

Okay, I do want President Obama out of office.  My dream would be that he would wake up tomorrow morning and say - "I'm done."  Then give a speech saying how much he sucks and how badly he's been doing his job.  BUT I know that's not going to happen so I'll wait until 2012.  I don't wish for anything other than an election to take him out, unless of course someone manages to find his Watergate and he's shamed out, that wouldn't be too bad either.  Okay, let's just say I would settle for just about anything that gets him out of office that is legal and causes no physical harm.  I didn't say anything about ethics.  Ahem. 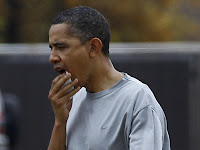 But when I saw that fat lip the other day, saw BO walking with that gauze in his hand, there was a teeny tiny part of me that was like - "aw-w-w-w .. why couldn't it have been me who caused that accident!!?!"  I mean - there have been a few things he has done over the last couple of years I would have loved to pop him in the mouth for.  For LYING to the American people maybe?  But no.  I never wished him harm.
Still, I'm enjoying the fat lip vicariously, hoping there was a little more than a basketball elbow behind it.

Because I really don't care.

I so hear you, Janie Lynn. I'm thinking that there is probably (undoubtedly, even?) an impeachable offense(or two?)that Mr. Issa will uncover in his investigations. I could live with BO being impeached. Next year. Maybe in the spring. *wistful sigh*

I'm w/ you, too JL! Is it wrong to enjoy the 'fat lip' of the guy who has given our country & her people several black eyes in his short tenure??? I think we both know that answer.

you think YOU'RE bad? I kept joking with friends about how it's too bad they didn't stitch his lips TOGETHER :-)

Liberal/Progressives would yell at you: Why can't you be nicer to "our American president?"

Fat lip for a fat head?