.
Not too many years ago people would say to me - don't complain - you didn't vote.  And my reply would be that I didn't have to vote to be able to complain, that's what's great about the United States - free speech extends even to people that don't vote! 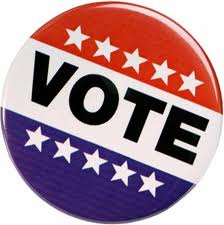 Why didn't I vote?  Because politics bored me silly and when I tried to pay attention it just didn't sink in.  My eyes would glaze over and off I'd be onto something else.  I'd convinced myself it was all too enormous - the economy, foreign policy, domestic policy, the house, the senate, secretaries of this and secretaries of that.  I knew who the main people were but beyond that - the whole subject didn't compute for me.  I reasoned that I was uninformed and would rather not vote than place an uninformed one.

I thought I was a democrat because at some time in my life I remembered someone (no idea who) telling me that democrats were the party of the working man, and republicans were for the rich.  So I must be a democrat, right?

Suddenly I paid attention.  I found myself drawn to the news, day in and day out.  Suddenly, people who I rolled my eyes at in the past when they said they were political junkies started to make sense to me.  I was hooked and I realized - I wasn't a democrat.  Not sure I'm actually a republican either but much more on the right than the left.  It took the next few years for me to realize what I believed and who I believed in and to form strong enough opinions to confidently feel like I could vote as an informed member of the electorate.

In November of 2004 I voted in my first election, ever.  And I voted with both of my children who were voting in their first national elections.  We went together.

Every citizen in this nation has the right to vote.  But I sincerely wish that if they cannot say they are truly informed - they would wait to vote until they are.  Especially in this election.  It is too important to be a popularity contest or a response to the slickest campaign.

I'm glad I didn't vote before I educated myself.  Because I wouldn't have been voting for the right reasons or with the correct information.

I mean really - the People of Walmart vote.  It's scary out there.

You didn't vote? I didn't know that. You stopped reading me sometime ago, that's fine, but now, I can no longer read you.

I sent you an email Fuzzy, I am not sure you read my post. I am glad I did not vote when I was uninformed. I do vote now. There are many reasons I have not been reading and commenting on a lot of blogs lately, It's hard to keep up with the number I used to read. I was hoping to start catching up - I just know I will not be able to be incredibly consistent with that, but I hope I will be welcome if I visit your blog.

Oh, and I voted for McCain last time, not that I should have to defend myself.

Oh, Janie! I shouldn't jump to conclusions like a big dummy. I'm so sorry that I totally misunderstood you. Of course you are always welcome at my blog.

I've never seen you be unfair, seemed like you just misunderstood.

Thanks for taking another look!