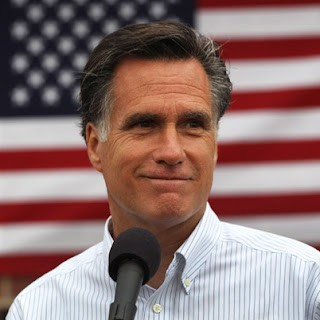 ... on a river of NyQuil, I fell asleep last night as balloons were falling at the RNC.  I heard a lot of Mitt Romney's speech, but mostly it had a dreamlike quality about it.  Not sure if what I heard was really what he said.  But earlier in the evening when the couple who lost their son spoke, and the woman who Mitt helped with her laundry when he came to her house - oh I cried.  I couldn't help myself.  And I wasn't crying simply because the stories were so touching.  I think part of the reason I was crying was because I knew these stories had to be out there.  I surmised a long time ago that Mitt did not talk about his good deeds because it is part of his faith to minister to other people, to do it, not talk about it.  And some of it finally came out.

Full disclosure, I was baptized as a Mormon, when I was a mere 17 years old.  Truthfully, I had a crush on one of the young 'elders' who came to our house and converted me.  So .. my conversion lasted about a year, and then I went back to being your basic Protestant.  But my experience with people of that faith has always been positive and I was SO hoping some of Mitt's goodness would come out.  His reluctance to talk about himself in that fashion has made people accuse him of not having a heart, of being uncaring and only being interested in making money.  I knew that couldn't be true, but I was afraid the truth would not come out.

Now it has.  And now I'd like to see Barack Obama show his compassion and love for his fellow man demonstrated in a personal way - where are his stories?  Does he have any?  Honestly, I doubt it.

Hi, Janie LYnn. I hope you're feeling much better today.
I had to laugh at the NyQuil mention; my sis was so receptive to the sleep part of it she told me her husband had to bring the NyQuil to her in bed...she couldn't take it and then go to bed because she'd barely make it to bed!

I cried too when I heard the people talk about Romney's goodness and caring; mostly because I imagined this country needs someone so badly who's like that and that it just might not happen. Honestly, I can't bear the thought.
I doubt Obama's got ONE STORY like that..NONE. YOu are SO RIGHT.