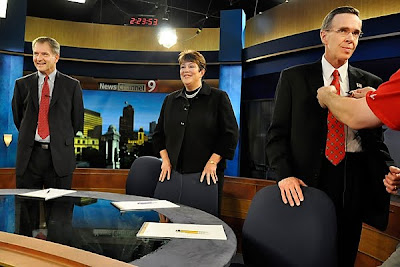 Republican Dede Scozzafava endorsed her former Democratic opponent Sunday in the race for an upstate New York congressional seat, shaking up the contest for the second day in a row after exiting the race Saturday.

Scozzafava dropped out after Conservative Party candidate Doug Hoffman experienced a late-in-the-game surge. The move was expected to consolidate GOP voters behind Hoffman on Tuesday.

But on Sunday, Scozzafava issued a written statement in which she backed Democrat Bill Owens.

"I am supporting Bill Owens for Congress and urge you to do the same," she said. "In Bill Owens, I see a sense of duty and integrity that will guide him beyond political partisanship. He will be an independent voice devoted to doing what is right for New York. Bill understands this district and its people, and when he represents us in Congress he will put our interests first."

Hoffman and Owens are competing for the 23rd Congressional District seat formerly held by Republican John McHugh, who was lured away by the Obama administration to be Army secretary.

Scozzafava was criticized by members of her party for being too moderate on social issues. However, it's unclear how much of an impact her endorsement will have as there were mixed messages coming out of the GOP -- a spokesman for the National Republican Congressional Committee said Saturday that Scozzafava was releasing her supporters to vote for Hoffman.

And poll numbers suggest Owens would have to make significant inroads among Republican moderates to pull support away from Hoffman. A Siena Research Institute survey showed 64 percent of Scozzafava voters were self-identified Republicans -- only 19 percent identified themselves as Democrats.

Democrats, though, were clearly banking on Scozzafava to try to tilt the balance in their favor.
White House Senior Adviser Valerie Jarrett said on ABC's "This Week" that Democrats would "love" to have the Republican candidate back Owens.

I say goodbye & good riddance to her. She's no "moderate." She's a 'progressive republican,' which of course means 'liberal democrat.'

btw, Janie Lynn, I don't know HOW you keep up w/ all the 'disinformation we deserve!'