Government is the problem

As much as I hate to give this man the time of day, ugh, just can't stand him, Michael Moore's new movie comes out and says it. Capitalism is evil. That is Michael Moore's stance. I mean wow, he has such a history of seeing the good in this country, doesn't he?

His new movie "Capitalism: A Love Story" contends that capitalism benefits the rich and condemns millions to poverty. "You have to eliminate it and replace it with something that is good for all people and that something is democracy." Democracy? I thought we had a Democracy. Capitalism is not a form of government so it can't be replaced with a form of government. Apples and oranges. Or can it? If he's talking Socialism, that would be all-encompassing, wouldn't it?

What is it we are really fighting here, when we stand up against Obama and his government run healthcare, when we bring to light and object to Communist advisers in the White House? What are we saying when we say we want smaller government and want the government out of our 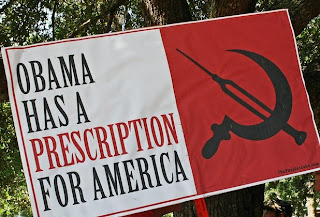 We are objecting to a Socialist society right here in the U.S.A.

Because you know what? It's been creeping in for years and years and years. I don't know where it started but watching the Fox special on text books with Tucker Carlson the other day, made me realize that our children have been indoctrinated in something other than the society we have now, for years! In order not to offend anyone, to make things fair our kids' text books have been sanitized to the point where the only evil people in the world, apparently, is us! The U.S. is portrayed as being the aggressor in wars, the charity of our country is not highlighted, and other nations and peoples are given a pass on anything bad they have ever done in history because we don't want to hurt anybodies feelings. In some books they aren't even saying what country most of the September 11th terrorists came from! Can you say Saudi Arabia? Can you say Islamic extremists? Because our children's text books can't!

All the political correctness has allowed immigrants to move here and not assimilate. What happened to people wanting to become Americans?? Now they move here and demand rights so Americans tie themselves in knots to accommodate their different cultures. And we are losing our own. 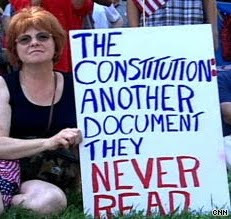 We haven't spoken up because when we did we have been told that we are intolerant, racist, and discriminatory. We have been shouted down while they have removed God from our city seals and taken down our holiday displays and shaped the very words we are allowed to say!

One year the company I work for displayed a "pride" flag next to the U.S. flag in honor of "pride" month and in the spirit of diversity. I complained, other people complained, and it hasn't been done again. I don't have a flag for being heterosexual and I don't want a flag representing some one's sexual orientation next to my American flag! This has reached the point of being ridiculous!

And now, we have a president who is very nearly a Socialist and our government is being run by not only Democrats - but extremely liberal Democrats. They are willingly placing our country on the road to Socialism. 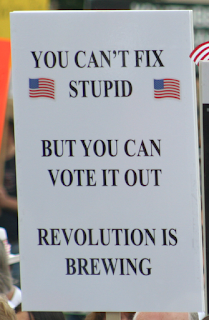 We cannot be silent any longer. In a way I thank God for this healthcare issue. It has made people look at Obama, the government, and what is happening with our country as a whole. There is no shame in being a conservative. There is no shame in wanting to stand by the Constitution and the Bill of Rights and our religion. Did you know that Socialists consider religion to be "superstition?" So when we become sufficiently enlightened like they are, we won't need to rely on a "superstition" like religion and God.

I cannot stress it enough. We need to wake up and pay attention. We need to write letters, send emails, go to tea parties and town hall meetings and we need to continue to make our voices heard! And most importantly we need to speak up with our votes!
Posted by Janie Lynn at 2:51 PM

Hmm .. I'd say that capitalism has a lot to do with getting Moore where he is economically right now.

I wonder if he forgot that.

There are places on the planet where he'd have been shot by now.

Sorry, but people who are opposed to capitalism are ignorant.

Keep fighting for liberty every day!