Talking to a liberal

Speaking to my brother on the phone today, the subject crept closer and closer to politics, a subject we have agreed not to talk about because we are diametrically opposed in almost every possible way. Yet - my liberal brother sounds a bit hesitant about his man Obama.

I didn't jump on that and rub his nose in it, I just quietly relished the moment thinking - okay, it's a baby step . . . ! That is, until we started tip-toeing around the healthcare issue and Fox News. His opinion is that no one should watch ONLY Fox News because people who do are "fed" a certain mindset and untruths masked as facts. I had to laugh although again, I bit my tongue. Yeah - that main stream media certainly doesn't slant things a certain way, do they? And they ALWAYS report the facts! Uh huh! NOT. 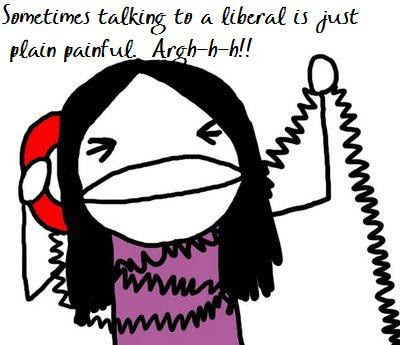 Astonishing! My brother is no dummy, and I could not believe these things were coming out of his mouth! I told him that it would start that way, but once the insurance companies were squeezed out because they can't compete with the government, we would ALL have government run healthcare. It would only be a matter of time.

My brother said "but that is a 'could be' not a 'will be'. We can't vote on a 'could be'. If I could have reached through that phone I think I would have slapped him. Is that what the liberals can't see? They cannot look beyond the here and now and realize that everything has to start somewhere, and getting the public "option" out there is just a stepping stone?

We stopped the conversation before it got more complicated, we were on the phone because we did have some serious family business to discuss and we know we have to work together. But that is the closest my brother, with his degrees in history and political science was actually a little (underscore little) thoughtful about what I was saying. He didn't immediately tell me I was wrong and trample my voice to tell me how.

And he actually admitted that he does watch Fox News along with a few other outlets because he wants all the angles of the issues. Personally, I think Fox is starting to win a tiny bit. Not that he would ever admit it. But if he ever crosses over to our side completely - you can bet I'll rub his nose in it. BIG!

I certainly hear you on how liberals are shutting up on Obama. I remember in January how all my liberal friends kept telling me that Republicans and conservatives are finished, forever gone. They went on and on about the greatness of Obama. They are all very quiet now.

They are in a complete panic that Obama is looking like Carter II and that is why they lash out so viciously at those who oppose him.

My eldest son is a big lib and was a big Obama supporter. But being 24 the latter only lasted as long as it was cool to be one. Now he is more concerned about graduating college and getting a job and has no interest in politics unless I bring it up and then he argues with me out of habit and, as smart as he is, ignorance.

I doubt he will vote in the mid-terms, along with most young people, and I am certainly not going to encourage him to do so. My parental instinct to make sure he exercises his right to vote stopped when he voted for a man who is only making our lives worse.

I also have . . . had . . . a good friend who is a big Obama gal. We were also Facebook friends but I recently saw she dropped me, no doubt because I occasionally expressed subtle glee at his failures. Some people just can't handle the truth.

Clifton - he tried to tell me the public option was off the table but even if it was back on - it was just an option. When I countered by explaining that once insurance companies have to start competing with the government, they will be squeezed out, he got quiet. I swear liberals just don't think the issues through to the end.

TRO - yes, my kids are liberals too. Unfortunately I did not realize what was happening in our school systems which has poisoned the minds of our youth with political correctness and socialist leaning ideas. They teach revisionist history to the point that many of our kids don't know anything that's good about America's past. Sad. By the time I realized - my kids were already in college where the ONLY thinking allowed is liberal. Don't know if my kids will vote in the mid-terms but I sure as heck will!