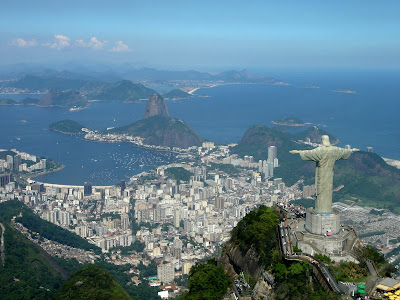 I'm a little disappointed. Not about the Olympics, I was actually pretty ambivalent about it even though I live in a Chicago suburb. But after it was announced that Chicago was knocked out in the first round, I was shocked but relieved. And then I must admit to experiencing a bit of glee. Congratulatons Rio!!

No, what I'm disappointed about is that Sean Hannity beat me to the great article in the Times Online from the U.K. today and talked about it before I could write about it. I was searching for something that said how I was feeling, and this article does. The title "Obama's Olympic failure will only add to doubts about his presidency." The saying 'perception is reality' comes to mind. And the perception of our president in the minds of the rest of the world is that he's well, a girlie-man. No one is afraid of him.

President Obama thought this Olympic bid was about him. He said "I know you face a difficult choice among several great cities and nations with impressive bids of their own. So I've come here today to urge you to choose Chicago for the same reasons I chose Chicago nearly twenty-five years ago - the reasons I fell in love with the city I still call home." And "Each one of those neighborhoods - from Greektown to the Ukrainian Village; from Devon to Pilsen to Washington Park - has its own unique character, history, song, and sometimes language. But

each is also a part of our city - one city - a city where I finally found a home."

"We stand at a moment in history when the fate of each nation is inextricably linked to the fate of all nations - a time of common challenges that require a common effort. And I ran for President because I believed deeply that at this defining moment, the United States of America has a responsibility to help lead that effort, and to forge new partnerships with the nations and peoples of the world."

"Nearly one year ago, on a clear November night, people from every corner of the world gathered in the city of Chicago or in front of their televisions to watch the results of the U.S. Presidential election. Their interest wasn't about me as an individual. .. " Why on earth did he say this? The man is still campaigning and imagines that glowing aura around his head is real! Did he really believe that the IOC and the other bidder's delegations cared about his success in our presidential election??

Of course he had to say something apologetic and remind people that he is different from that evil guy George W. Bush - “We’ve got everyone. This could be a meeting in Chicago, because we look like the world. Over the last several years sometimes that fundamental truth about the United States has been lost,” he said. 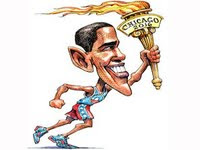 The man is pathetic. Utterly and tragically (for us) pathetic.

Obama thought he could go to Copenhagen and burst onto the scene like a rock star and MAKE it happen for Chicago by the sheer force of his personality.

But guess what, Mr. President? Turns out - you're not all that. Glad others see it as well.

**Oh, and how long before somebody says the IOC is racist? Not saying it makes sense. Just askin'.
Posted by Janie Lynn at 6:42 PM

I think in this particular "defining moment", we (pardon the poor English) ain't in no shape to be modeling much of anything for the world! We are just about in ruins economically and we really need to get our house in order before we go showing off the city that gave us the great panacea, Obama.

It seems that only yesterday Obama was chastising some journalist - I forget who since they're all in his hip pocket anyway - when he was asked what he would do about the huge ACORN corruption story that broke. I think Obama's response was something like "There are more important things..."

Hey, Obama ... practice what you preach!

It is a relief to me. I mean, the Chicago Machine does NOT need more funding right now. Nightmare!

If I have the money and the inclination to attend the Olympics, would I rather go to Chicago or Rio?

I think Rio was a pretty good choice, and I can't imagine why Big Brother got himself tangled up in this embarrassment.

Will this infuse Obama with an ounce of humility? Perhaps not likely, but one can hope.

"Oh, and how long before somebody says the IOC is racist?"

Actually, I've been saying that all we have to do is wait...Jimmy Carter will tell us of the IOC's racism any day now.

Seems like Jimmy is forgetting just what he said about that racism thing these days. Hmm..