COW AND THE ICE CREAM

*
ONE OF THE BEST (EMAIL) EXPLANATIONS OF WHY OBAMA WON THE ELECTION
--From a teacher in the Nashville area
"We are worried about 'the cow' when it is all about the 'Ice Cream.'
The most eye-opening civics lesson I ever had was while teaching third grade last year...
The presidential election was heating up and some of the children showed an interest.
I decided we would have an election for a class president.
We would choose our nominees. They would make a campaign speech and the class would vote.
To simplify the process, candidates were nominated by other class members.
We discussed what kinds of characteristics these students should have.
We got many nominations and from those, Jamie and Olivia were picked to run for the top spot. The class had done a great job in their selections. Both candidates were good kids.
I thought Jamie might have an advantage because he got lots of parental support.
I had never seen Olivia's mother.
The day arrived when they were to make their speeches.
Jamie went first.
He had specific ideas about how to make our class a better
place. He ended by promising to do his very best.
Everyone applauded and he sat down.
Now is was Olivia's turn to speak.
Her speech was concise.
She said, "If you will vote for me, I will give you ice cream.."
She sat down.
The class went wild. "Yes! Yes!
We want ice cream."
She surely would say more. She did not have to.
A discussion followed. How did she plan to pay for the ice cream?
She wasn't sure.
Would her parents buy it or would the class pay for it.
She didn't know.
The class really didn't care.
All they were thinking about was ice cream.
Jamie was forgotten. Olivia won by a landslide.
Every time Barack Obama opened his mouth he offered ice cream and
52 percent of the people reacted like nine year olds.
They want ice cream.
The other 48 percent know
they're going to have to feed the cow and clean up the mess."
This is the ice cream Obama promised us! 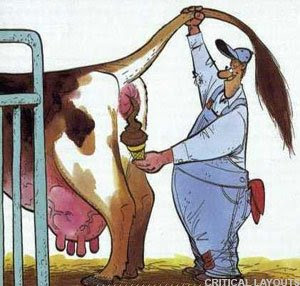 Remember, the government cannot give anything to anyone --
that they have not first taken away from someone else.

There is about 5% of that original ice-cream-happy 52% who just figured out what happened. And it hasn't even been a year yet!

I remember seeing that e-mail going around. It sure explains the 2008 election. And that cow picture is disgusting, just like the policies Obama is trying to shovel down our throats.