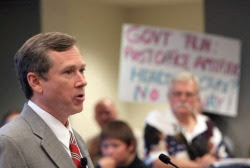 Sorry, that song just comes to mind. I did go to a town hall meeting addressing healthcare, given by Republican Congressman Mark Kirk of Illinois. I was impressed by him and pretty happy about most of what he said. Illinois being the home state (Senate wise anyway) of Barack Obama, it's a blue state for the most part. So Kirk stands alone against the liberal tide in the state, and as an active member of the U.S. military he has a unique perspective on many issues facing us today. He also has the proud distinction of being the ONLY congress person to have NOT added ANY pork to the stimulus bill. He is against the tradition of add-ons to all the bills that pass through the house and senate, and stands by his ideals. That alone makes him worth listening to.

He is against the public option in healthcare reform and is honest about how that would eventually lead to a single payer, government run healthcare system. Thank God. I am so used to hearing lies from government officials lately that it was quite refreshing to hear some truths for a change. And there was no equivocating either, no hemming and hawing and no backing down on the issues he supports. He treated everyone with respect as opposed to someone like Barney Frank who basically told some of his audience that they weren't worth talking to. I need to look at the conservative, alternative healthcare plan that Mark Kirk is proposing. But as a human being I think he is honest and strong, and doesn't change his opinions or vote - depending on which way the wind blows. He bears watching.

Something else coming out of the $35,000.00 a day vacation home the Obamas are occupying right now, is the announcement that the justice department plans to look into CIA interrogations of high level terror suspects, and whether or not CIA officers and or Bush administration officials should be brought up on charges that they tortured terror suspects and participated in other questionable practices to gain information in their war on terror.

Okay, this is where I lose it. What happened to the days when what the CIA did behind the scenes was none of my business? The actions they took to protect this country were, I am sure, not actions that your average guy on the street actually wanted to know about. What good does it do to put this stuff before congress and people like Nancy Pelosi and Henry Waxman and others who seem to want to leave us defenseless out there while Barack Obama apologizes for everything we have ever done and bows to Saudi kings?

This administration is dismantling everything this country stands for, our self-reliance, our love of liberty, and God forbid - our strength. We must continue to fight against this, Obama needs to be made impotent until he can be voted out. And he WILL be voted out.
Posted by Janie Lynn at 11:08 PM

"Obama needs to be made impotent until he can be voted out. And he WILL be voted out."
Oh, how I hope & pray.

Now about that impotence thing. What do ya reckon is the best way to do that???

Hi Susannah - you are my first commenter, thanks so much!

The best way to keep Obama impotent is to continue fighting, going to town halls, sending letters and emails to our representatives, and voicing our dissent loudly and often! And then - as soon as we have the chance we need to start voting out the liberal representatives who are supporting Obama right down the line.

I think we also need to support talk radio and conservative television in any way we can. I've sent several emails to sponsors of Glenn Beck's show, things like that.

Any time we get the opportunity to stand up and speak for conservatives, we need to do it!